Dear Us (Smart Wrestling Fans Who Presumably Like Wrestling),

I generally don’t find it necessary to come to the defense of unpopular wrestlers because, well, they’re usually rich and, more importantly, big boys who can fight their own battles when they care to. However, while swimming through the Twittersphere last night during WWE’s Money in the Bank, I saw a level of frustration and vitriol directed at a particular wrestler that I found distasteful and, frankly, ignorant of how wrestling works. That wrestler was one Randy Orton. 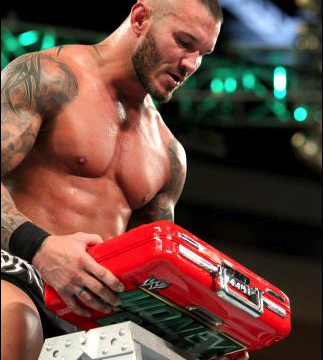 When Randy Orton won the “Red” MitB briefcase, people were tweeting that the finish “ruined the match” and espoused that Randy Orton was undeserving and (dare I say) “stale.” Orton was on top in the WWE for three years, sharing the spotlight with John Cena, Triple H, and Batista. He was in so many main events that it’s a fool’s errand to even count them. However, over the last two years, Orton has been missing from the tippy-top of the card, leading fans all over the internet to speculate about attitude problems and wellness policy violations. Now, suddenly, he’s being pushed again and the same fans are complaining about it because they feel he vaulted over internet favorites CM Punk and Daniel Bryan.

Randy Orton is one of WWE’s anchor stars — and what is an anchor? An anchor is sturdy and reliable. It keeps the ship from floating out of port or away from the big fish. The anchor isn’t supposed to be “awesome;” it’s supposed to be functional. If Daniel Bryan, Dolph Ziggler, Kofi Kingston, and Cody Rhodes were on top in WWE without John Cena, Randy Orton, Mark Henry, and Alberto Del Rio, how would you know they were great or exciting?

There’s a reason that top stars, while sometimes great workers or talkers, have never been the fastest or flashiest guys — they need to stand as the measuring stick by which other wrestlers are defined. Is the main protagonist in a sitcom typically the zaniest or funniest character? Usually not, because you need an effective “straight man” to help define the craziness of the supporting characters. Wrestling is the same way. Would you have known Psicosis and Rey Misterio Jr. were unique stars if The Giant and Hulk Hogan hadn’t been presented as the default?

Of course, in today’s post-modern, post-kayfabe wrestling world, “smart” fans are easily upset when shows (especially big shows) aren’t booked exactly how they would have done it. At times I’ve been as guilty of this as anybody, but frankly this is something we all need to get over if wrestling is going to persist as a healthy, viable form of entertainment. I have a strong feeling that Breaking Bad isn’t going to end with Walter White living happily with his family, but I’m going to have to live with it, and I will certainly appreciate the amazing ride the show has taken me on.

As many brilliant people ranging from Ice T to Booker T have famously said, “Don’t hate the player, hate the game.” If you don’t like the way Randy Orton is booked, don’t complain about him like he writes the show and is holding down your favorite wrestlers out of spite. When WWE features Orton, they’re not telling you that he should be your favorite wrestler; they’re telling you that he is the benchmark. If you see ways in which other stars are more exciting than him, good. Whether this MitB push sees Orton become a top-two heel or a top-two babyface, he will surely be better than adequate in the role and continue to offer effective contrast to the Punks and Bryans and Zigglers. You may not love Randy Orton, but you need him, and you need him on top.

Money in the Bank, Open letter, Posts that end with sentences that are also sexual innuendos, Professional Wrestling, Randy Orton, WWE, You should all be ashamed of yourselves