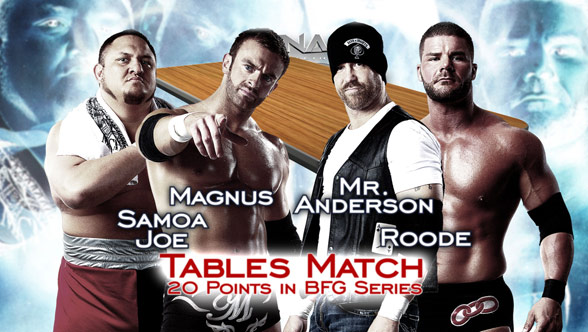 Just signed for Thursday’s “Hardcore Justice” edition of IMPACT on SpikeTV is a special four-way “Bound For Glory Series” Table Match, with 20 points going to the winner! It will feature BFG Series leader Magnus vs. Samoa Joe vs. Bobby Roode vs. Ken Anderson of The Aces and Eights! Can Joe win and finally claim the top spot in the Series? Roode and Anderson certainly need the points to stay alive in the competition! How will Roode’s new alliance with Christopher Daniels and Kazarian help him get the points he needs? Or, will Magnus win again and take the ultimate commanding lead? Thursday’s hardcore edition of IMPACT will certainly shake up the standings in the BFG Series!

Best Case Scenario: Joe and Magnus dominate the beginning of the match, working together to bump their opponents back and forth. However, they eventually begin arguing over who is allowed to get the win. The heels cut them off, leading to back-and-forth action that ends when Bad Influence comes to wrong Magnus and aid Bobby Roode in getting the big win.

Worst Case Scenario: Joe and Magnus dominate the beginning of the match, working together to bump their opponents back and forth. However, they quickly begin arguing over who is allowed to get the win. Chaos ensues, and following the poorly-executed screwy finish of all poorly-executed screwy finishes, Anderson emerges with the big win and regains footing as a player in the BFG Series.

Dave Says: It’s a little confusing for two members of the Main Event Mafia to be booked in this match, as a face-off between Joe and Magnus seems way too soon in this angle. Given that Roode is the leader of a new faction in TNA and trying to get over his increased threat to the World Heavyweight Title, he needs this win.