This week, TNA presents Hardcore Justice in lieu of a standard episode of Impact Wrestling. Below is a rundown of all advertised segments: 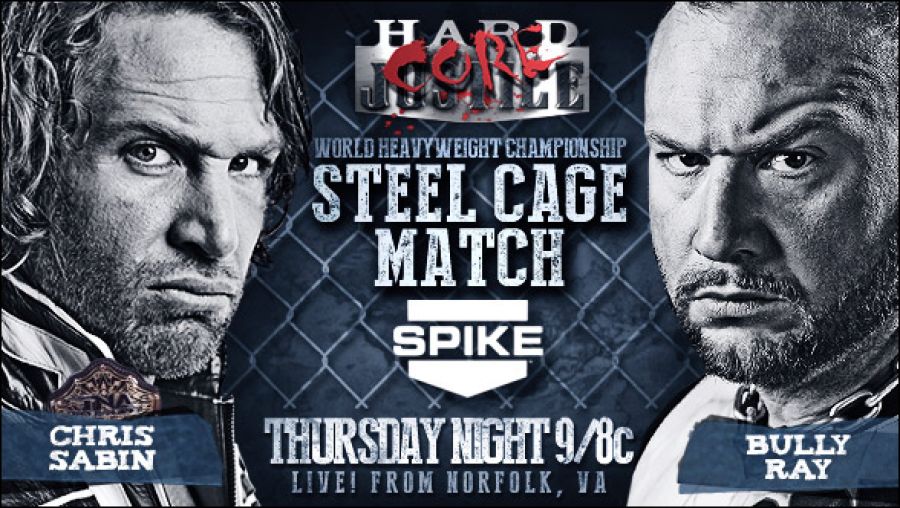 World Heavyweight Champion Chris Sabin vs. Bully Ray of The Aces and Eights  (If Bully Ray loses, he will never get another title shot!)

The much-anticipated World Title rematch that fans have been waiting for finally takes place on Thursday night inside the confines of the Steel Cage – with no outside interference from the Aces and Eights or Main Event Mafia! Can Chris Sabin continue his amazing storybook reign as champion – or will Bully Ray reclaim the title he claims was “stolen” from him? Bully only has one shot at the gold – if he loses, he will never get another chance at the World Title!

Best Case Scenario: Sabin starts off the match hot against Ray, getting in his exciting, high-impact offense in the opening minutes of the contest. Ray then cuts the champion off, leading to an extended period of selling for Sabin in the vein of Destination X. Ray goes to put his opponent away once and for all, attempting to superplex him from the top of the cage. Sabin blocks and goes into a big comeback, ultimately hitting his finisher on Ray in the middle of the ring, and getting the clean win he didn’t at Destination X.

Worst Case Scenario: The match starts out as a back-and-forth contest between Sabin and Ray, until Aces & Eights come to the ring in an attempt to open the cage door and assist their fearless leader. The Main Event Mafia come down to make the save, but in the chaos, Anderson passes the ball peen hammer to Bully Ray, who uses it once again to regain his title and get his revenge on Chris Sabin.

Dave Says: This match is both intriguing and very hard to call because the possible outcomes represent such drastically different paths forward for TNA. The stipulation that a loss keeps Bully Ray out of the Title picture makes it seem likely that Ray will regain the title unless TNA legitimately feels that they don’t have a dollar left to make off of him as champion.