It’s a rough time to be “the angry guy” (Ed. note: it’s your job to get the gimmick over, we just set the table) at Juice Make Sugar.  Summerslam, with two 4+ star matches, was a lot of fun.  Raw was pretty good, with the fine folks at WWE seemingly hearing my rants, and making it clear that everything, and (almost) everyone on the show had a purpose.

For a little while, I didn’t think I’d have anything to bitch and moan about this week.  For a few days, I thought I’d be able to just sit back and enjoy the show, like a true mark should.

But then the deities of wrestling news woke up, and spoke up, with the latest rumors out of Nashville.

As I browsed PWInsider.com for the latest gossip, I found that the most shocking news wasn’t all that new at all. Impact Wrestling (don’t call it TNA) is once again on the verge of a major Talent Relations nightmare.  This time, it’s not a WWE has-been or never-was that’s about to walk free.  It’s THE Impact original.  It’s the one wrestler who truly IS Impact Wrestling.

AJ Styles could soon be a free agent. 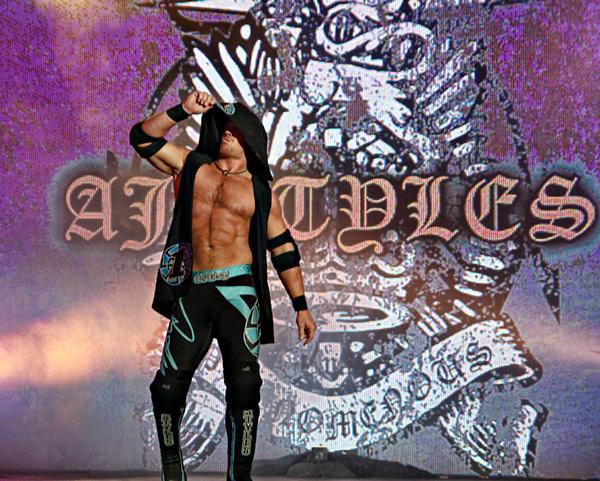 Let that sink in for a minute.

The guy whose style defined the X-division.

The guy whose style and talent transcended the role of “the talented little guy,’ becoming the face of the company, and setting the standard for other small-but-talented guys, like Austin Aries, to main event.

The guy who no Impact fan can imagine wrestling for WWE.

The guy they’ve spent MONTHS repackaging, as a wildcard in the never-ending Impact vs. Aces & Eights feud.

The guy who isn’t worth re-signing, apparently.

Wasn’t this shit supposed to stop when Brother Love got the boot?

Mike Johnson reports Styles’ contract is set to expire next month, and Impact is doing very little to get a new deal signed.  Are you kidding me?  I’m no AJ fan, and never have been.  If you need evidence, go find a DVD of ROH’s 2005 Long Island show, and watch me cheer Jimmy Rave (and laugh at my god-awful hair, while you’re at it.)  But I’d have to be utterly clueless not to acknowledge AJ’s value to the company.  He’s not Devon  Dudley, or Luke Gallows, Bobby Roode, Samoa Joe, or anyone else that Impact has almost let slip away.  He’s John Cena.  He’s the face of the company, like it or not.  If they let him slip away, you may as well stop watching.

Love the talent at Impact, but what a stupid fucking company.

The following was posted on AJ’s official Facebook page, where any true professional contemplates career choices:

TNA is his best choice.  Maybe he’s holding out for more money, but the cash-strapped company doesn’t want to cough it up.  I can’t imagine them asking him to take a paycut, especially if they’re still willing to fly Hulk Hogan to every podunk city.

You’ll never see AJ Styles on WWE TV.  Even if AJ wanted to leave his family behind and take that god-awful tattoo on the WWE’s road schedule, there’s just too much working against him.  He makes Daniel Bryan look tall.  He’s not young.  He doesn’t work a “WWE style.” Summer Rae will respond to my stalkerish text messages before you ever hear “WWE Superstar” and “AJ Styles” in the same sentence.

ROH would welcome AJ back with welcome arms…if they can afford him.  He’s been on TV for 11 years, and not fake-ass Sinclair TV.  International TV.  TV that everyone can watch – even if it’s just the same million or so people who bother every week.  The matches would be good. The booking would be simple.  It might not be worth it, though.

Japan?  Get the fuck out.  With the exception of New Japan Pro Wrestling, Japan is dead.  Good matches, no money. No point.   You’re better off doing the John Morrison tour of the super-indies, at $10k per match.

I don’t know if AJ Styles has any real options outside of Impact Wrestling, but that doesn’t mean he won’t walk.  Impact should be bending over backwards to keep him, even if it means a super-part-time deal, like those given to guys like Hardy or Angle.  He’s worth it, even if it means he’s only around for pay-per-view build-up.  They need him.  His absence on those big shows?  You’ll feel it.

While we’re talking about Impact, I have an idea on how they can bolster that X-division roster, without spending much money.  Raid CHIKARA.  The company has seemingly “shut down,” leaving a lot of really talented free agents, who work for relative peanuts.  Pay them $250 a match, and the X-division will be reborn.  If you knew how much guys like me spent on CHIKARA dvds, you’d know I’d spent $30 on some subpar Impact PPV featuring some of their talent.  Outside of the occasional Jigsaw/Rubix appearance, however, I won’t hold my breath.  That would make almost as much sense as resigning your top star.

Agree? Disagree? Think You’re Better Than Me? Tell me @AndyMillerJMS